Stores With The Best Prices

Have you been desperately searching for the most convenient backpacking stove to take on your next camping trip? Look no further as we bring you the Jetboil flash.

Asides from being reliable, this cooking system is lightweight and ideal for all campers and backpackers. Not to forget, it is gas-fueled as well (Isobutane-propane), which you can find anywhere including Walmart.

The first thing that you need to know about this stove is that you can boil water within 100 seconds. Which is crazy fast!

This stove is rated as our best backpacking stove on the market, but it does have it’s limitations. Continue reading our review to get our thoughts.

If you are interested in this stove, be sure to sign up for price drop alerts and we will notify you when the price meets your required amount from any of our top retailers. 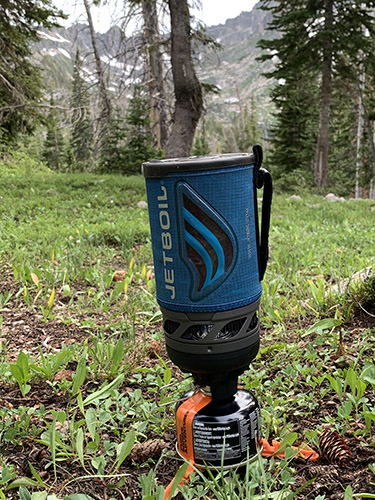 As we have already mentioned earlier, the Jetboil flash comes with a one-liter cooking cup and has an insulating cozy. There is also a thermo-chromatic color change indicator on the side of the main cup and a push-button igniter that you are going to love.

Note that the whole accessories and parts of this Jetboil flash can be packaged inside its cooking cup that is about one liter.

All of its advantages range from the fact that it is:

Furthermore, it comes with a burner that has been made from stainless steel. When it comes down to the heat, you can easily adjust it in a bid to increase or decrease the heat.

Subsequently, it can be used to prepare soup, coffee, instant noodles, and even chocolate milk.

Even though we’ve rated this backpacking stove as a 5 star review, it does come with some disadvantages.

My buddy Jon cooking summer sausage over open fire. It has isn’t challenges as this isn’t what it was made for 🙂 Somebody left this folding chair 4 miles in, which was frustrating as we had to carry it out… but we sure did LOVE using it while we were there 🙂

Here are a couple issues that come with this stove:

Limited to 2 cups of water

It is not suitable for cooking other meals

As you can see from the image above, yes you can cook other meals on it, however it takes some creativity. It is designed for boiling water in a cup, and amazingly well.

I’ve been camping at 12,000+ feet in late September in Colorado archery hunting for elk and had some issues getting the Jetboil to light. I was testing this stove with the MSR Dragonfly Stove, and the Dragonfly stove started right up without any issues. The temperature was in the 20’s and mixed with the elevation, it took close to 5 minutes to light.

In fairness, since that trip, we’ve consistently been at around 10,000 feet elevation and similar temperatures without issues.

How To Use Jetboil Flash?

Some other accessories you can attach with this backpacking stove include:

Jetboil flash is the product of Jetboil, and it was established in the year 2001 by Perry Dowst and Dwight Aspinwall. The company was founded back in the previous woolen mill in Guild, New Hampshire.

It was not until the year 2003 before they launched their product at the outdoor retailer’s trade show. 2006 saw the founders moving its headquarter to Manchester, New Hampshire.

As a result of modeling their combustion and even going further to select materials that will effectively optimize efficiency, the company has been capable of creating the fastest Jetboil you have ever seen.

Also, in the year 2001, Dwight and Perry decided to revolutionize Backcountry cooking through the development of a fast yet compact and highly efficient stove that came with a difference that has never been seen by both campers and the world.

You can always trust the engineers from Jetboil as they constantly and relentlessly push the limits of all that is possible through the invention of technologies that continually redefine the entire backpacking stove industry.

To Wrap It Up

Asides from the pros outweighing the cons that are associated with this Jetboil flash, it is a backpacking stove that is efficient, lightweight, and, most especially, very simple to utilize.

Although it is not the ideal backpacking stove for cold weather at high elevations, it is still capable of offering a highly reliable alternative for backpackers that are seeking to boil just water swiftly.

Also, it is rated among the best backpacking stoves that you can purchase in the market today. It is indeed a good value for your money and camping trip.

There are no reviews yet. Some of the links on this page are affiliate links, which means we may receive a small commission if purchases are made through those links. We do not represent any outdoor gear company and thus will provide unbiased and hosted reviews. By no means do affiliate links add any cost to you, but the commission from those links helps us keep the site online.

Get notified of outdoor gear price drops and view price comparisons on the top gear.

Any cookies that may not be particularly necessary for the website to function and is used specifically to collect user personal data via analytics, ads, other embedded contents are termed as non-necessary cookies. It is mandatory to procure user consent prior to running these cookies on your website.